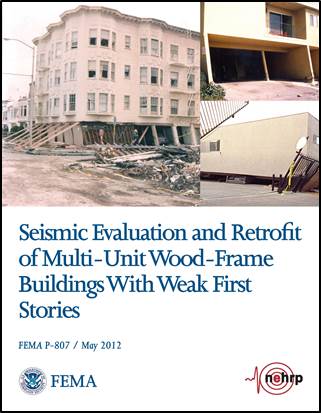 Multi-unit wood-frame buildings with a weak first story represent a significant risk in highly seismic regions of the United States because of their high potential for collapse. This collapse potential is due primarily to their soft or weak first-story walls, which have often been weakened by large numbers of openings such as garages or store front windows.  The ATC-71-1 project developed the FEMA P-807 report, Seismic Evaluation and Retrofit of Multi-Unit Wood-Frame Buildings With Weak First Stories in 2012, addressing seismic retrofitting of weak-story wood-frame buildings in seismically active regions of the United States, with a focus on multi-family, multi-story buildings with weak first stories, such as those damaged in the Marina District of San Francisco in the 1989 Loma Prieta earthquake, and apartment buildings with tuck-under parking, such as those damaged in Southern California in the 1994 Northridge earthquake.  These seismic retrofitting guidelines are the first to focus solely on the weak first story and to provide enough additional strength to improve seismic performance but not so much as to drive earthquake forces into the upper stories, placing them at risk of collapse. They are also the first to take into account the strength provided by existing non-structural walls, making seismic retrofitting more affordable.

An electronic tool was developed as part of the project to help apply the rules and perform the calculations described in the FEMA P-807 report. (It is noted that the FEMA P-807 report contains all the data, formulas, and procedural background needed to apply the method without using the Weak-Story Tool.)  The necessary calculations require a detailed accounting of the locations of the various walls in plan. To accomplish this effectively, the Weak-Story Tool relies on a CAD (computer-aided drafting) interface as the means by which the user will layout the walls. The Weak-Story Tool was developed using Visual Basic.Net to work on any Windows machine with Windows XP or later operating system.

DOWNLOAD Weak-Story Tool Version 1.5.0.35 (5MB zip file). The Weak-Story Tool has undergone periodic improvements since the first version was released in September, 2011. These changes are documented in the Release Notes (64KB pdf). These changes are mainly voluntary enhancements and bug fixes in the user-interface and file input/output (I/O). To our knowledge, no critical changes affecting the results of the analysis have been reported. However, some of the bugs could cause the program to crash under certain circumstances. To avoid frustration and to ensure the highest quality software product possible, all such bugs have been resolved in the latest version, and we are happy to address any bugs reported in the future.

Release Notes (64KB pdf) document the list of changes in each version.

1. How do I enter a command in WST (CAD Interface)?

3. How should I draw reference geometry (CAD Interface)?

4. How do I set up reference lines in WST (CAD Interface)?

5. How do I set up reference image in WST (CAD Interface)?

6. How do I copy/paste entities from one level to another using a common base point (CAD Interface)?

7. What is the meaning of the point in brackets (CAD Interface)?

8. How do I make the background white (CAD Interface)?

10. Why are the Analyze and Summary buttons disabled?

11. Why are my retrofit walls making no effect?

12. What is the distinction between building weight and wall gravity load and where are they entered in WST?