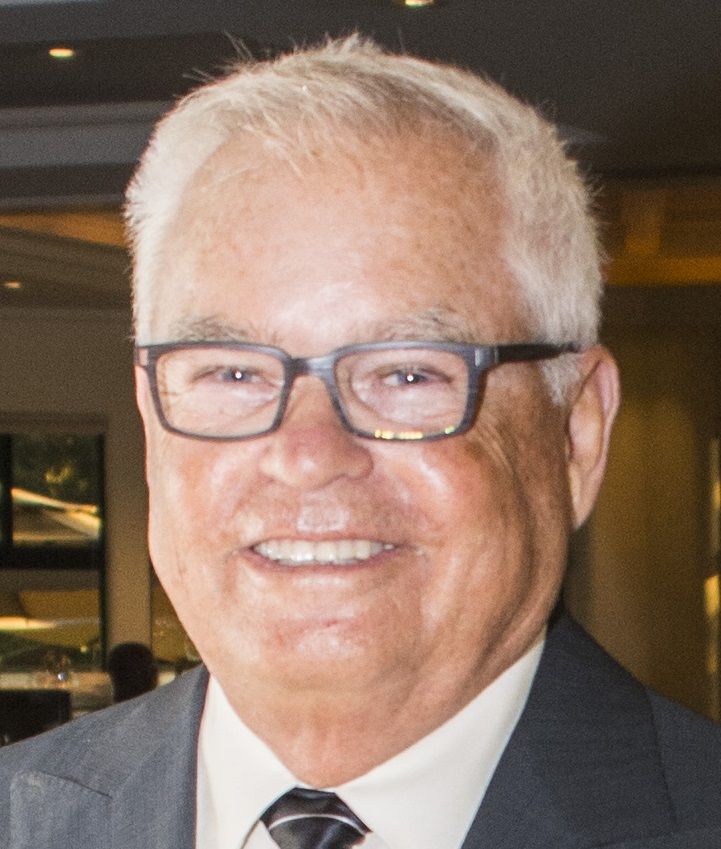 Summary.  This paper provides an overview of the format, participants, and outcomes of a series of fifteen bi-lateral US-Japan workshops conducted since March 1984 by the Applied Technology Council of the United States and the Japan Structural Consultants Association to provide a forum for the rapid exchange of ideas and information for the advancement of structural engineering practice.  Participants have included leading design practitioners and academic researchers from Japan, the United States, and other Pacific Rim countries.  Of the 378 papers presented in the workshop series, 87% addressed topics related to earthquake engineering of buildings, including the seismic design of new buildings, seismic protection systems, pre-earthquake seismic evaluation and retrofit of existing buildings, and assessment and repair of earthquake-damaged buildings; the remaining 13% covered other topics in structural engineering, including non-technical issues such as engineering education, qualification, responsibilities, and licensing. The author played a key role in organizing all fifteen workshops.

Introduction.  Since March 1984, the Applied Technology Council (ATC) of the United States and the Japan Structural Consultants Association (JSCA) have carried out a cooperative United States-Japan program for the improvement of structural design and construction practices.  To date (January 2016), the program has consisted of a series of fifteen U.S.-Japan workshops, held at 2-to-3-year intervals, at locations convenient to participants from both countries. Workshop locations have included Tokyo, Kobe, San Francisco, San Diego, Hawaii, and Victoria, British Columbia.  The primary purpose of the program has been to provide a forum for the rapid exchange of ideas and information for the advancement of structural engineering practice.  Participants have included leading design practitioners and academic researchers from Japan, the United States, and other Pacific Rim countries.

The concept for the program was suggested in the early 1980s by Roland L. Sharp, a consulting Structural Engineer from California, and Masakau Ozaki, and a Professor within the Architectural Engineering Department of Chiba University in Japan.  In the early years of the workshop series, C. Rojahn and R. Sharpe served as Workshop Co-Chairs, and in recent years, these roles have been carried out by C. Rojahn and Kit Miyamoto, a practicing Structural Engineer from Sacramento, California.

Workshop Participants and Programs.  To date, the average attendance of a typical workshop 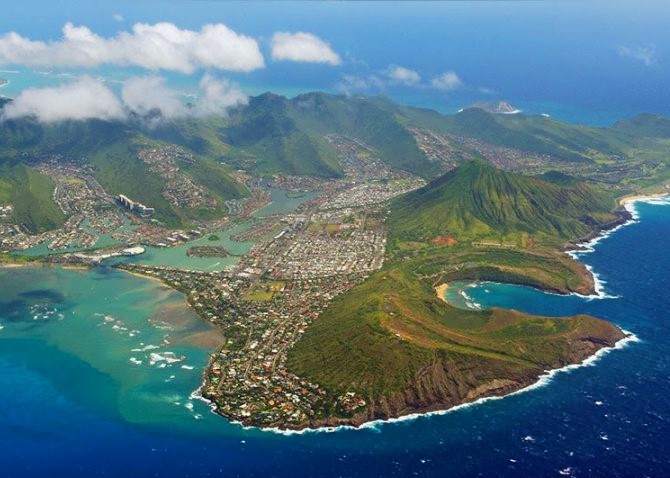 has been 42 people, with participants presenting an average of 25 technical papers (see Table 1).  The workshop programs have typically followed the same pattern:  two days of technical presentations by workshop participants in plenary sessions, followed by a half day of “working group” discussions on topics of special interest to workshop participants.  In a few instances, such as in Tokyo in 1988, the plenary sessions were opened to the profession at large.  Program topics for each workshop have been selected by Joint U.S.-Japan Steering Committees (appointed for each workshop), followed by a “Call for Abstracts” issued to JSCA members, ATC Subscribers, individuals identified by the Steering Committee, and organizations known to be interested in the mitigation of impacts from earthquakes and other natural and man-made hazards, including organizations in other Pacific Rim countries.  The objective of the calls has always been to broaden participation as much as possible.  Papers presented at each workshop have been selected from submitted abstracts, and written versions of the papers have been published in workshop preprints distributed at the outset of each workshop.  With the exception of a small number of travel grants provided by ATC to U.S. participants to attend workshops held in Japan, participants, or their employers, have paid their own travel and hotel expenses, as well as a workshop registration fee to cover the costs of meeting room accommodations, meals, refreshments, and workshop handouts (e.g., workshop preprints).

Technical Paper Topics.  To date, 378 technical papers have been 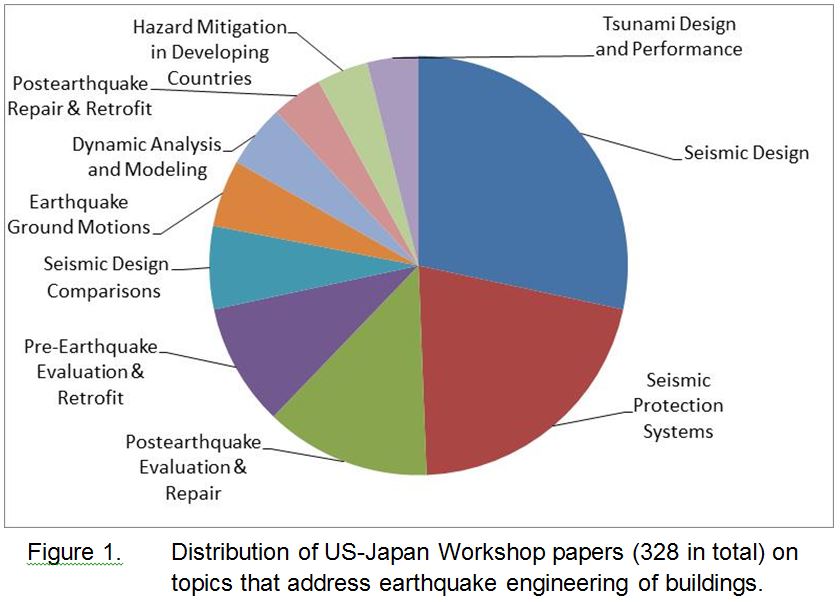 presented at the workshops and printed in the Workshop Preprints/Workshop Proceedings.  Of these, 328 papers (87%) have addressed various topics associated with earthquake engineering of buildings, including seismic design of new buildings, innovative use of seismic isolation, passive energy dissipation, and active control (collectively known as seismic protection systems), pre-earthquake seismic evaluation and retrofit of existing buildings, postearthquake assessment and repair of damaged buildings, and other related topics (see Figure 1).  The remaining papers (13%) have addressed a wide variety of topics in structural engineering, including (1) engineering education, qualification, responsibilities, and licensing, (2) wind engineering, (3) design and performance of buildings impacted by tsunami, (4) design and performance of buildings impacted by explosion, (5) resiliency and rapid recovery after disasters, (6) seismic design and performance of nuclear reactors, and (7) risk and reliability analysis.

Lasting Contributions and Future Considerations.  The technical presentations and 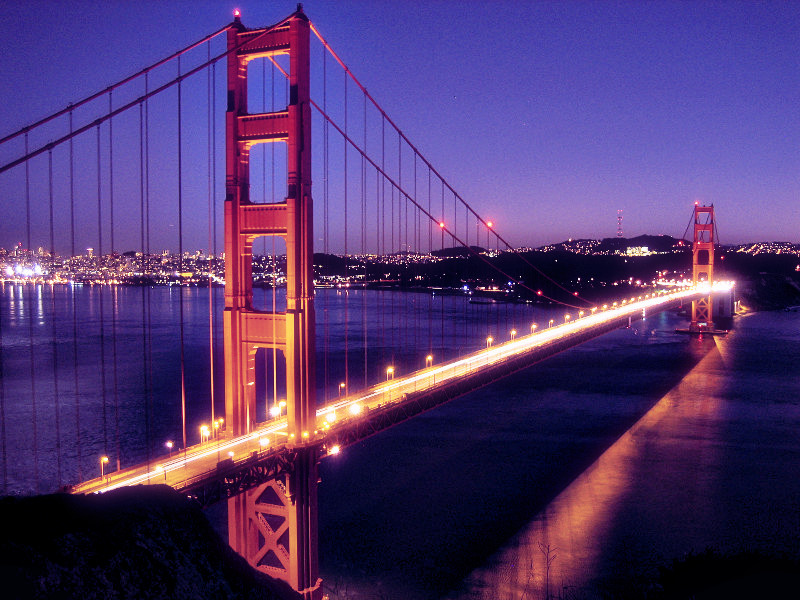 working group discussions at the fifteen U.S.-Japan workshops held to date have yielded high-caliber, state-of-the-art technical information and insights to workshop participants and others who have sought available information on the ATC website (preprints of recent workshop papers) and in ATC-published reports, including published Proceedings for the first six workshops.  The technical presentations and discussions authored by workshop members have identified topics and issues which have drawn attention and heightened scrutiny by the profession.  One prominent example is a paper by Lawrence D. Reaveley and Guy J. P. Nordenson in the 4th workshop in 1990  entitled, “Acceptable Damage in Low and Moderate Seismicity Areas,” that underscored the importance of addressing large, in-frequent earthquakes in places like the intermountain region of the United States (e.g., Utah) and heralded the decision in the United States to consider a much longer return period (2475 years, which corresponds to ground motions having a 2% probability of exceedance in 50 years, instead of 475 years, which corresponds to a 10% probability of exceedance in 50 years) in seismic criteria for the retrofit of existing buildings (and later the design of new buildings).  This contribution was monumental.

In the future, workshop participants and design professionals in Japan and the United States will likely benefit from technical papers which explore the differences between Japanese and American seismic design practice,  including the reasoning behind the use of larger shear coefficients in Japan (as documented in early workshop case studies), updates to those criteria, and current code criteria in Japan regarding the estimation of damping in real structures -- a largely ignored parameter in U.S. design practice.

[1] Christopher Rojahn holds an Engineer’s Degree and a Masters Degree in Civil (Structural) Engineering from Stanford University and a Bachelor of Science Degree in Civil Engineering from Bucknell University.  Prior to joining ATC, he served for three years in the Officer Corps of the National Oceanic and Atmospheric Administration (NOAA) and for 10 years as a Research Civil Engineer at the U.S. Geological Survey (USGS) in Menlo Park, California.  During his 34-year tenure as ATC’s Executive Director, he served as Principal Investigator/Project Executive/Project Manager on more than 50 major ATC projects.  His career also includes memberships and officer positions in various professional associations, including the Earthquake Engineering Research Institute (Board Secretary), California Earthquake Safety Foundation (Board Chair), and Structural Engineers Association of Northern California (Honorary Member).  Mr. Rojahn has testified before the U. S. Congress and advised the White House Office of Science and Technology Policy on issues relating to earthquake hazard mitigation.  He has also served on oversight panels of various federally sponsored earthquake engineering research programs, including nine years on the Board of Directors/Governance Board of the National Science Foundation (NSF) Network for Earthquake Engineering Simulation (NEES) Program (most recently as Board Chair).